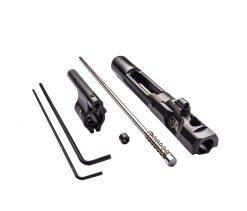 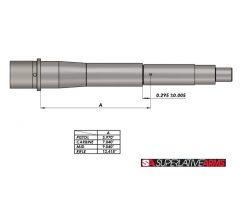 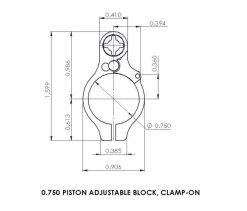 The Superlative Arms Patented “Bleed Off”, Gas Piston System For The Ar15 Platform Adjusts The Gas Flow By Bleeding The Gas Out Of The Block Instead Of Restricting The Flow Like Conventional Adjustable Blocks.

Thank you for submitting a review!

Your input is very much appreciated. Share it with your friends so they can enjoy it too!

Runs great despite a few tweaks.

First off, very easy to install but follow the instructions. One thing not mentioned in the instructions (at least I didn't recall seeing) is the potential need for a bolt spring. Although, I'm not sure if bolt spring was the trick but couldn't get it to run without one. That said, I changed a number of things all at once after the first failure and not sure entirely what fixed it. My build was a 300 HAM'R and aside from a slightly longer carbine buffer tube, different barrel (chambered in 300 HAM'R), and a 300 BO magazine, my initial setup was pretty much mil-spec. After my first few FTE & FTF's, I read for hours troubleshooting and to get this running without a hitch, I added the following: Adams Arms bolt spring, Sharp's Reliabolt, w/ POF Roller Cam Pin. I also ditched the custom carbine XL buffer tube setup and put in a standard BCM Carbine buffer with VLTOR A5 buffer weight. Did this cos I read from one guy on a forum stating he couldn't get it to run well w/ the BCM back end. The info above was collected from a bunch of forums. I'm sure if you're building a standard mil-spec 556 you won't need the extras, but I was chewing up $0.95 rounds like candy so I went all in. I am, however, confident the above additions can only make your build easier and from what I've read, less wear during use. The recoil is a bit snappier/sharper, altho still very smooth. Seems a bit quieter suppressed than my DI builds of same caliber & setup. Suppressor is an SC Omega 30 Cal. Upper/lower is Spartan billet JBO with Fortis handguard. Lastly, after 50 rounds I amazed at how clean my receiver is internally. Also seems like I'm getting a faster fire rate but no means of measuring. Hope this review helps y'all.

Quality In Stock with FAST Delivery !!!

This is my 4th Superlative Arms piston kit, and there will be more in my future !!! Thanks for the great service !!!