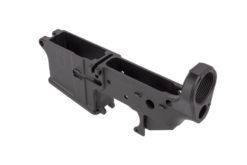 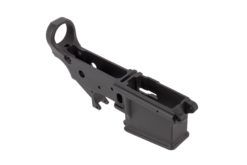 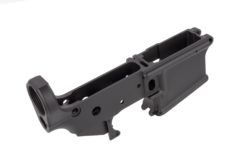 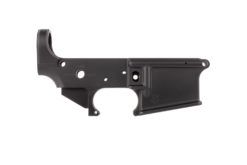 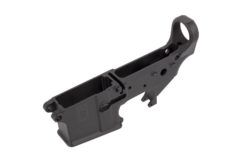 The Sons of Liberty Gun Works stripped lower receivers are made to the tightest tolerances while still being compatible with Mil-Spec parts and upper receivers. This ensures that there is absolutely no wobble between receivers which can affect accuracy. These stripped AR-15 lower receivers are a great starting point for your next build. They are forged from 7075-T6 aluminum, which is known for its high strength and crack resistant properties while also being lighter than 6061. After the forging process is complete, the Loyal 9 lower receivers go through a final machining process to eliminate flash marks and true up the tolerances to be better than Mil-Spec. Finally, each AR lower is coated in a matte black hardcoat anodized type 3 class 2 finish to further increase corrosion resistance. Get your build started today with the SOLGW loyal 9 stripped lower receiver.

The name Loyal 9 was chosen for this lower receiver as a way to show support for LEOs, first responders, and members of the military that put their lives on the line every day to keep people safe. The Loyal 9 name comes from a secret patriot political organization formed in 1765 and likely influenced the larger Sons of Liberty organization.

Sons of Liberty Gun Works is a custom rifle manufacturer in the United States that specializes on the AR-15 platform. They began producing purpose-built weapons for law enforcement and civilians alike and are given a lot of praise for focusing on the details that make an AR reliable. Function over form is what their rifles are known for and they are guaranteed to get the job done. From full rifles to individual parts, you can’t go wrong with SOLGW.