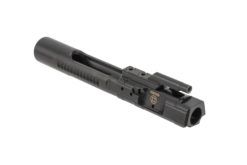 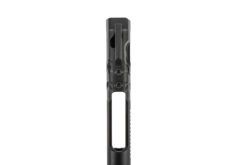 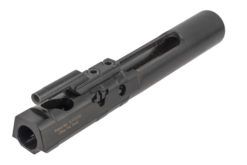 The Gemtech Suppressed Bolt Carrier is designed for 5.56 AR-15 rifles utilizing a suppressor. This unique 5.56 Carrier stands out from the rest by allowing you to easily switch between unsuppressed and suppressed modes without the need of an adjustable gas block or messing around with buffer weights. This ensures your rifle will run reliably no matter how you have it set up. Additionally, it reduces carrier speed for less felt recoil, and brings the cyclic rate of a suppressed rifle down to unsuppressed levels. The heavier M16 full auto profile eliminates bolt bounce, and the enhanced cam pin path increases dwell time for improved extraction. If you plan on running a suppressed rifle, plan on upgrading to the Gemtech Suppressed AR-15 Bolt Carrier.

Gemtech, or Gemini Technologies, began as a suppressor company in 1976 by a group of well-known suppressor designers. Their suppressors have been used by all branches of the United States Military and Special Forces groups all around the world. They are an ISO 9001:2008 certified company that is dedicated to bringing high quality products to the market.