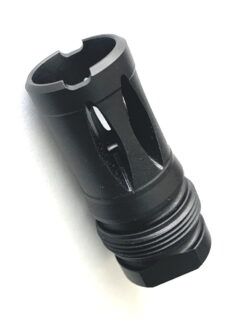 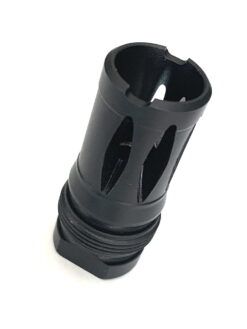 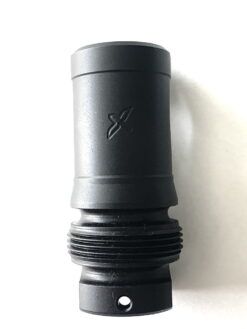 Only 5 left in stock

Ask any tactical shooter within law enforcement or the military will testify that a flash hider is indispensable and invaluable. Not only does it minimize the muzzle flash which can give away their position, but a well-designed flash hider can reduce the flash caused by the muzzle blast that can impair the shooters vision when looking through the scope. Forward Controls Design’s Xeno Flash Hider just so happens to be one of those expertly made flash hiders that law enforcement and military personal speak so highly of.

There are flash hiders and then there is the Xeno Flash Hider from Forward Controls Design. This incredibly well-crafted stand-alone muzzle device holds every aspect that an experienced shooter would look for in a flash hider. The Xeno Flash Hider truly is a top-quality product but when coupled with a Xeno Adapter equipped suppressor is when it truly performances at the highest level.

It’s not all about the reduction in flash allowing for spraying of bullets, the Xeno Flash Hider is well suited for the precision-minded shooters due to its non-negotiable repeatability and solid return to zero.

The Xeno Flash Hider uses the industry standard 1-3/8-24 threads, which is ideal for those shooters that have any of Dead Air’s Nomad series suppressors. Plus, the left-handed threads, again shows Dead Air’s attention to the shooter’s experience as it eliminates the risk of the adapter unthreading from the silencer when removed, which in turn verifies the mount is still tight when installing on your firearm.