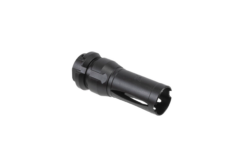 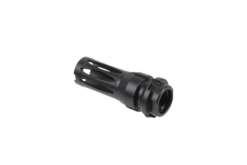 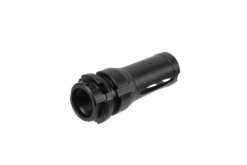 Only 6 left in stock

They are a big fan of the A2 flash suppressor / compensator (compensator is the Army TM 9-1005-319-23&P, Air Force TO 11W3-5-5-42, Navy SW370-BU-MMI-010 designation).  It is inexpensive, and does a decent job of what’s asked of it.  They went through a phase of expensive and fancy brakes and comps, all of them have worked well but they know they’re not practical for defense/duty ARs.  The flash, noise and concussion they produce are the result and byproduct of reducing the felt recoil (brakes) and keeping the muzzle down (comps).

Since they now have more room in front of the 3 and 9 o’clock ports, they incorporated wire cutter alignment notches ahead of these ports.  The wire cutter notches will probably earn them some flak and endless ribbing about having to cut wires at the range while punching holes on paper, but they always design combat features into their products, they’re there, you don’t have to use them 🙂

6310KM is a light and short blended performance muzzle device.  It provides 20 to 25% better muzzle rise compensation than the A2, and what is impressive is that it does so without sacrificing its flash suppression capabilities, or creating more noise and concussion.The number 63 in its name pays homage to the Stoner 63 light machine gun, the shape of its ports draws heavily from the Stoner 63 LMG’s flash suppressor design. 6310KM is a part of Forward Controls’ x10 muzzle device series. KM denotes its Dead Air Keymo mount capability.

Proudly designed and made in USA.