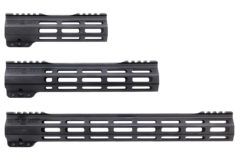 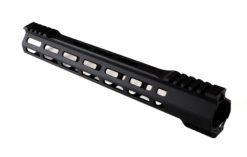 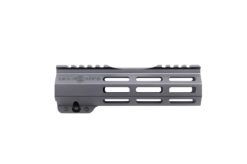 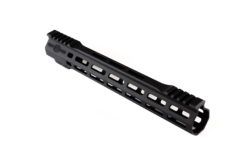 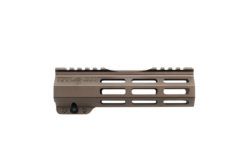 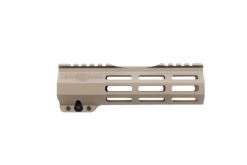 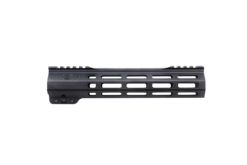 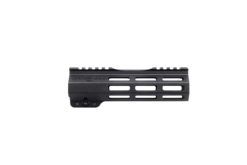 The SMRS (Slim M-LOK Rail System) V2 by Dirty Bird Industries is a high quality and feature packed M-LOK handguard designed for AR-15 platform rifles and pistols. When designing this handguard, the team started from a basic set of requirements: The handguard must be tough, versatile, practical and have a straight forward install.

Key changes on the V2 include:

Removal of the integrated QD mount

The end result is a great looking, zero compromise handguard suitable for a wide variety of builds.

The shockwave generated when firing an AR-15 creates over 1000 G’s of acceleration. This means that a one pound part will generate over 1000 pounds of force every time the rifle is fired. Combined with the thermal cycling generated when firing multiple rounds, it can be very difficult to keep a handguard from slipping forward or rotating. Many attempts have been made to solve this problem. Some solutions are overly complex, resulting in difficult installation and high manufacturing cost. Some designs, like the popular key seat, are overly simple. The key seat will stop a handguard from coming completely off of the rifle; however, it still allows some forward slip and 360 degrees of rotation.

Free-floating handguard mounting systems tend to produce an upward lift of the handguard, resulting in the muzzle end of the handguard floating higher than the receiver end. This lift can adversely affect the performance of the rifle, especially when using iron sights. Even if the handguard is only used for protecting your hand, a small amount of lift is noticeable when aiming down the sightline. This visually makes the rifle seem crooked. Even if the rifle performs with precision, it can create an optical illusion, thereby reducing accuracy.

The patent pending ASALTM (Anti-Slip / Anti-Lift) system is simple, easy to install, easy to manufacture, and a cost effective solution to handguard slip and lift issues. The ASALTM system locks the handguard to the barrel nut using a CamLokTM fastener featuring a 10 degree taper angle. This small taper creates a huge mechanical advantage, greatly increasing the force generated by a standard screw. The mating groove in the barrel nut is offset so as it is tightened, the handguard is pressed against the upper. This mitigates lift while also preventing slipping or rotation around the barrel’s axis. The result is a handguard that will not slip, rotate, or lift.

The result is a 10x decreases of handguard muzzle end lift.