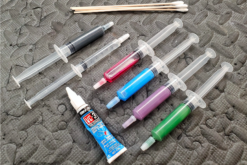 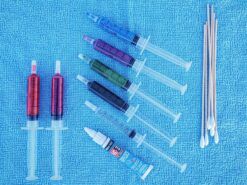 The Trajectory Arms Armorer Chem Kit comes with all the necessary grease and thread lockers necessary for assembling ARs or swapping parts. Each “chem” in the kit is in an easy application syringe with cap. We don’t believe in one size fits all applications which is why a versatile kit like this is so handy. Using the right chemical in the right application allows you to build it correctly the first time.

The idea for the Armorer Chem Kit came from how Trajectory Arms stores and uses these products in their shop. They found the syringes to be an easy method of storing and applying grease and thread lockers with easy to remove caps.

There is enough of each type to do as many as 20 or more AR-15 builds depending on how thick you choose to lay on the materials.

Rather than buying a bunch of expensive bottles of each type that will go bad long before you use them up, the all in one Armorer Chem Kit will have just enough of each for most casual or enthusiast builders. Since thread lockers usually are only good for about a year after opening, don’t waste your money on large amounts just to have it go bad before you can use it.

You may notice that the Loctite comes in 5 ml syringes with 3ml of Loctite and 2ml of air. Loctite cures in the absence of air so the air in the tube is critical to keeping the Loctite from curing. For the longest lifespan we recommend keeping at least 2ml of air in the tube at all times. The extra air in the tube also allows you to easily shake the lower viscosity Loctite like 242 and 222MS that will separate over time.

Loctite expires 1 year from your purchase date however you should watch for signs of it going bad before use. If it goes bad before 1 year, let us know and we will replace the tube for you for free.

We recommend wearing gloves and keeping swabs or rags within reach when working with any chemicals in the Armorer Chem Kit. Some of them can have negative health effects if used inappropriately so use them responsibly and consult the documentation (listed below) if you have any concerns. We recommend wearing nitrile gloves an wash your hands after using any chemical or handling dirty guns.

Armorer Chem Kit contents and use:

Aeroshell 64 grease (grey) – Standard moly grease used by professional armorers and is generally accepted as the best grease for use on the AR-15. It is used for any threaded assembly where a thread locker is not a better fit. Assemblies that have their own locking mechanism such as staking or anti rotation tabs like barrel nuts and castle nuts are the most common application.

The grease component lubricates the threads during assembly allowing you to achieve a “wet torque”. This provides more clamping pressure for a given amount of applied torque. The grease also helps prevent damage to the threads from galling. The molybdenum disulfide additive is a dry lubricant that remains in place even after the liquid component of the grease has dried or baked off from heat and allows for easier disassembly.

A liberal application is typically used and can be brushed on or smeared with your finger. Wipe off excess with a swab or rag. The syringe allows you to apply just the right amount so there is usually very little waste and the small tube can be stretched over several builds.

Aeroshell 64 is also handy for holding small springs in place temporarily and for assisting in driving roll pins.

Flexbar Rocksett ceramic adhesive/cement (clear) – Rocksett is a ceramic adhesive that features an extremely high temperature rating of 2,105F. It is used primarily for suppressor mounts since it will not deteriorate from use with a suppressor since the ceramic is water based. It is also often used with gas block set screws although we typically prefer one of the red Loctites (271 or 272) for this. For removal the most common method is soaking the assembly in boiling water for 15 minutes to soften it. You can also strike a steel assembly with a brass hammer to shatter the adhesive but this should be done with caution.

On suppressor mounts, use an amount roughly the size of a pea on the male thread toward the end. The muzzle device will coat the rest of the thread as it is installed. Over use can increase cure times so be sure not to over do it. Normal cure time is 24 hours so do not shoot the gun during that window. You can also “heat cure” the muzzle device by holding it over a heat gun at low temperature (150-200F) for 15 minutes. This drives out the moisture and can cure the Rocksett faster.

Rocksett can go bad over time so discard it when the liquid starts to turn yellow instead of clear or thickens up (sort of like honey). The tip of the syringe may dry out with repeated use as well so use a needle or small pick to clear the tip and purge a small amount onto a rag.

Loctite 271 (Translucent Red, High Strength) – This is our go to for gas block set screws. It is a high strength thread locker with high heat resistance and has been used reliably by large AR manufacturers for years. We recommend using it in combination with knurled set screws on gas blocks.

For install with any thread locker we recommend degreasing the threads with acetone or denatured alcohol first. For removal, you will need to heat the assembly up to approximately 350F in order for it to break free. A heat gun or torch is generally used for this.

Loctite 272 (Milky Red, High Strength) – **Available separately but no longer included in the kit** There is debate over whether 271 or 272 is better. We have found them both to perform well. 272 has a thicker viscosity than 271 and higher heat resistance but lower breaking strength. Installation and removal is the same as for 271.

Loctite 242 (Blue, Medium Strength) – Loctite 242 is the general purpose thread locker on the AR-15. It works great for most fasteners on rails, MLOK nuts, and more. Only mild heat (150F) is needed for removal on smaller fasteners but usually it will break free without. If you are working with a stripped fastener its probably worth adding some heat out of an abundance of caution.

Degrease the assembly before applying any Loctite for best results. Due to its lower viscosity, you may notice some separation in between use which is normal. Shake well before use.

Loctite 222MS (Pink/Purple, Low Strength) – Loctite 222MS is a low strength thread locker for use with sensitive applications and tiny screws. It usually does not require any head for removal and is often “just enough” to keep a fastener from coming loose. 222MS is best suited for small optic screws or the dogleg screws that come with Aero Precision M4E1 and other receivers. It is also called out specifically for use on the set screws in Wedge Lock handguards and the cross bolt in Pinch Lock handguards.

While 222MS is most appropriate for small fasteners, be sure not to over torque them during install. Use good quality tools and even a small amount of heat if there’s any chance of stripping a fastener.

Degrease the assembly before applying any Loctite for best results. Due to its lower viscosity, you may notice some separation in between use which is normal. Shake well before use.

Loctite 620 (Green, Retaining Compound) – Loctite 620 is a nice addition to the pro level Armorer Chem Kit for advanced users. It is a retaining compound used for sleeving and bedding applications. It can make up for sloppy fitting assemblies like barrels in receivers and is good up to a .005″ gap. Caution should be used with 620 as its easy to get things stuck so it should only be used if you are confident in your abilities. Loctite is not for use on threads!

For installation, degrease each mating surface and wipe a small amount on each one. Be careful not to get it in places where you cant wipe it up. Apply a thicker coating of 620 to one of the mating surfaces and push the parts together. Wipe up any excess immediately and place the assembly in a position where the liquid cant run out. You may also apply 100-150F heat for 10-15 minutes to allow the joint to cure faster.

For removal, apply 3-400F heat to the assembly and press the part out. Often times you may hear a small “crack” as the surfaces de-bond. Good fixturing and even heat is key. Soak parts in acetone to soften hardened residue, however mechanical removal may be necessary so keep that in mind before applying it to anything.

Vibratite VC3 (White ‘toothpaste’ tube) – Vibratite VC3 is an acrylic polymer that is great for applications where Loctite may not be as well suited. It is applied to the threads and allowed to dry for 10-15 minutes before installation which can help with sloppy fitting threads. We have found it particularly useful with trigger guard set screws and on threads that may need to be adjusted after installation like tensioner set screws. It also doesn’t have any minimum or maximum fastener sizes so it can be used on any threaded fastener.

Due to its high initial viscosity it can be useful as a soft retaining compound to fill a sloppy fitting part like a trigger guard since it will fill the space in between and dry firm.

While we don’t use it very often here, its very handy when its needed.

We have found these small containers are much better than the brush application since they don’t dry out as fast and is less messy.

Clean up with acetone and some heat may be useful to remove fasteners.

6″ Swabs – These are some of the most useful tools in the shop. We use them daily for application and clean up of various fluids. The swab is great for heavy application, spreading, and mopping up drips while the wooden end is good for detailed application of various chemicals and products in small areas. You can also clip the end of the stick in an angle for ultra precise touch up with paint, Cerakote, cold blue, or aluminum black.

Additionally, the stick can be used as a “slave pin” for bolt catch roll pins. Just clip off about 3/4″ of a stick and use it to hold the bolt catch in place while you drive the roll pin.