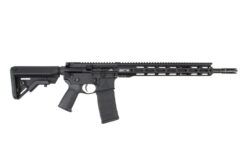 Only 8 left in stock

Motivated by the July 7, 2016, Dallas police ambush, RISE Armament set out to ensure that no police officer is outgunned by a criminal. Rise Armament made it their mission to develop a supremely accurate, highly dependable rifle that’s affordable on a law enforcement budget. The RISE Armament Watchman LE is that rifle.

Rise Armament developed the Watchman™ with input from SWAT/SOT/SRT officers, patrol officers, military snipers, competitive shooters, and firearms instructors to ensure it combined the best in functionality, accuracy, dependability, and affordability. From a squad car to an entry team, it’s duty ready right out of the box.