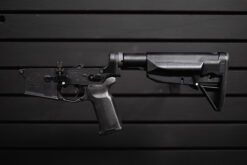 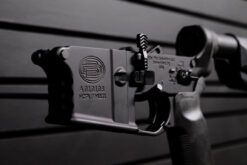 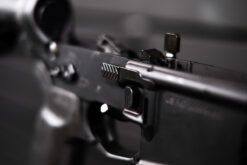 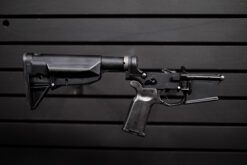 It is one thing to add features to a battle proven design that is over 60 years old. There are some pretty crazy lowers out there, but are they practical? Do they sacrifice reliability? Do they make the lower more difficult to service or upgrade?

This trigger assembly takes advantage of a two stage fire control design that has been trusted in both competition and combat roles for decades. The first stage pull weight is adjustable based on the trigger spring being used. The red spring will give you a 1.5lbs first stage pull and the black Extra Power trigger spring yields a heavier 2lb pull. And you can expect a crisp second stage break at 2.5lbs for a total pull weight of 4-5lbs (actual total pull weight may vary ± .5lb). The 5lb total weight gives the operator a greater level of safety and control in high stress environments but with a second stage pull weight of only 2.5lbs, the shooter can also squeeze off long range precision shots with ease.

Our ambidextrous safety selector is a superior drop-in replacement for all mil-spec safeties (AR platform 5.56 & 7.62) and is meticulously machined from the finest materials to provide the smoothest operation and a crisp positive feedback. The levers are machined from 7075 aluminum and are hard coat anodize after a heavy acid etch process which dulls the machined surface and provides a superior protective finish. The core or shaft is a hardened 416 stainless steel which is highly corrosion resistant and very strong. Our unique lobular interface between the lever and the shaft provides a solid connection and allows the lever to be installed in 6 different positions (not just two like other safeties) for the the ultimate experience in user customization. The engraved markings on the shaft simplify the installation of the 60 or 90 degree throw options.