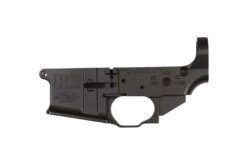 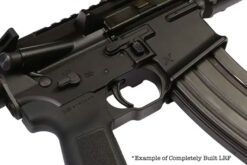 Machined from a solid block of 7075 aluminum, LRF is an ambidextrous AR15 lower receiver with built-in right side bolt release, designed to use our EMR-A (Enhanced Magazine Release, Ambidextrous), a Norgon Ambi-Catch will also work on the LRF.

Design of LRF was completed in 2019.  Due to difficulties of Covid-19 induced lockdowns and subsequent buying frenzies of all things firearms related, production was continuously delayed.  Neither SOLGW nor FCD are known to rush development or production, we had used this time to further refine the LRF.

LRF was designed with duty and defense users in mind. Its changes from TDP based lowers are based on ergonomics and better protection of magazine releases (both left and right side):

* EMR-A (Enhanced Magazine Release, Ambidextrous) fence on the left side.

* Countersunk take down pin hole on the left, when the user pushes the take down pin in from the left side, the pin can be pushed in further, with more protrusion on the right to pull from.

* Built in trigger guard with the same features as our TGF (Trigger guard, Forward Controls). TGF has more usable space forward of the trigger, not behind.  It also has a “ramp” to facilitate magazine loading for users that use the rear spline of the magazine to index and “rock” the magazine into the mag well.

LRF’s changes are subtle and wholly functions based, a duty/defense firearm doesn’t concern itself with aesthetics, nor benefit from them.  One will not find it decorated with lightening cuts/holes, or obnoxiously large logos.

A tastefully small Cygnus is engraved on the right side of the LRF magazine well to denote FCD’s involvement in the project’s development, one can easily miss or overlook it, and that’s the point, we don’t intend the LRF to be a walking billboard.  It’s designed and made for work, not for show.