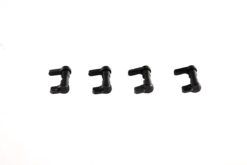 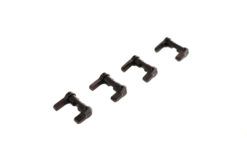 ASF (Ambidextrous Selector, Forward Controls) and SOLGW’s The Quick is a joint project between FCD and SOLGW.  The two companies have been collaborating on a few projects, starting with the 4140 steel MLOK sling mount (MSQ-H in FCD alphabet soup parlance). Work began in Dec. 2018 to create a safety that’s an embodiment of our not inconsiderable experience in AR15/M16 selector design and knowledge over the years.

ASF was designed from the ground up to be a defense/duty/combat safety selector, its mission is quite aptly reflected by the way its levers are attached the center, via a stainless steel roll pin.  The lever to center interface is immensely strong, the high shear strength (800 lbs) 420 stainless steel spring steel roll pin simply holds the two in place, and doesn’t handle any load.  One of the design goals dictates there be no wobble between the lever and center, we’ve called for very tight tolerances (+0.001/-0.00) on ASF’s lever and center interface to achieve that.

We are known to many for the dimpled pattern we use on some control surfaces (AA, or All Angles, is our designation).  ASF levers are serrated, not dimpled.  As the lever rotates, the user’s finger slides on the lever, anything but serrations along the length of the lever only impedes that movement and creates friction for no benefit.  Serrations diagonal or perpendicular to the length of the lever are similarly unhelpful.  Serrations parallel to the lever’s length help mitigate lateral movement, and do not impede the finger’s sliding motion.  ASF lever’s profile isn’t square, its outer most portion is somewhat tapered for a reason. When the user’s hand holds the pistol grip, the profile of the ASF lever conforms to angle of the thumb’s pad.

For our friends and customers that wish to see dimples on the ASF, there is a single dimple on both sides to function as a position indicator (in lieu of a pointer), it’s elegant and simple.

As we’re fond of saying, attention to detail matters in its application.

The end cap is for those that don’t wish to have a lever on the weak side of the receiver.  With the end cap, ASF becomes a convertible selector (between ambidextrous and non-ambidextrous.)

ASF is shipped with a selector spring, a KNS nitrided selector detent, two levers (or one lever, with an end cap), 4 roll pins (two are needed for installation, with 2 spares), with a single lever partially assembled.

ASF is a collaboration with Sons of Liberty Gunworks. Made in the USA.